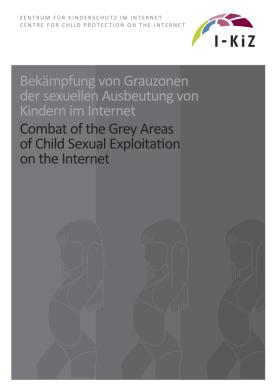 Children are sexually exploited online in a variety of ways. These include for example the trade in children as sexual objects, the distribution of depictions of sexual exploitation of children or deliberately making contact with children for sexual purposes. Many of these activities are illegal across borders and are being consistently combated. By contrast however, there are fringe areas which are not covered by criminal law.

Children’s rights are not only violated by depictions of sexual abuse, but also by depictions from grey area. Against their will, victims are presented as sexual objects and do not have any control over the distribution of the images. The depictions and their distribution on the Internet perpetuate the abuse of children, violate their privacy rights and interfere with their ability to defend themselves against harassment and assaults on the Web. At the same time there is the risk that the inclinations of paedosexually oriented people are strengthened, sexual assaults are promoted and grooming is supported.

In order to identify and describe manifestations of sexual exploitation in the grey zone, the No Grey Zones Network has developed categories and criteria grids. These criteria grids help to identify content that is attributed to the gray zone.

Since November 2014, the work of the No Grey Areas network has documented that with a close cooperation between hotlines, companies and experts it is possible to effectively combat depictions in the grey area of abuse and sexual exploitation of children.

The brochure “Combat of the Grey Areas of Child Sexual Exploitation on the Internet" documents the work of the No Grey Zones Network and presents the criteria for classifying the corresponding representations.

Here you can find the Table of criteria for Typical Features of Manifestations of Posed Depictions.

Here you can find the Table of criteria for Everyday Depictions in a Sexualizing Context.