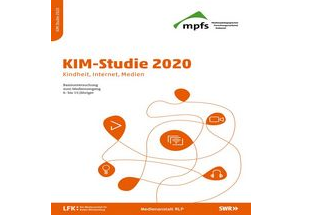 The topic of digitalisation, media use and media consumption by children has become even more prominent in 2020 due to the Corona pandemic. At the time of the survey for the KIM study in early autumn 2020, children were for the most part back in face-to-face classes, but three quarters of the students had already had experience with homeschooling.

Television continues to be the most frequent media-related leisure activity of children, with 70 percent watching television daily. At the same time, television also serves to impart knowledge; half of the six- to 13-year-olds watch knowledge formats, 27 percent news programmes. In addition to linear television, the use of streaming services is playing an increasingly important role: the availability of streaming services in households has increased significantly. In the meantime, 44 % of households with children have a corresponding subscription. With an average of 24 minutes, the usage time surveyed for the first time shows that Netflix & Co. have conquered a clear place in children's everyday media life.

71 percent of six- to 13-year-olds use the internet. The proportion of internet users increases with the age of the children. In terms of activities on the internet, WhatsApp, search engines, films/videos and YouTube are the most frequently used. Despite the special situation in 2020, there was no relevant change in daily internet use time, at least during the survey period in autumn 2020; it is on average three quarters of an hour (46 minutes) for six- to 13-year-olds. Overall, the KIM Study 2020 shows a high degree of stability in the media use behaviour of six to 13-year-olds.

Click here to get to: KIM-Study 2020- Childhood, Internet, Media