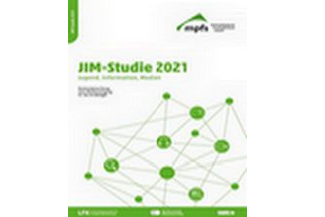 The search for information and news has played a major role not only since the Corona pandemic, but has moved further into the foreground in the discussion about fake news and the credibility of news sources. When asked about their three most important news sources, a third of 12 to 19 year olds name television (32%), one in five young people each name radio (22%) and the internet (21%). WhatsApp remains the most important communication service among 12 to 19-year-olds. 92 % of young people use it at least several times a week. Instagram follows in second place with 58 %, but is losing relevance compared to the previous year. TikTok (46 %) has gained further in importance among young people and displaces Snapchat (42 %) from third place. Young people are not very sensitive when it comes to data protection on these platforms. Only one third of young people have concerns about the security of personal data.

The JIM (Youth, Information, Media) study series has been carried out by the Medienpädagogischer Research Association Southwest (Medienpädagogischer Forschungsverbund Südwest) in cooperation with the Südwestrundfunk (SWR). The representative study maps the media behaviour of young people in Germany.

Click here to get to: JIM-Study 2021- Youth, Information, Media