Children have rights - offline and online. Could children’s right to vote contribute to the execution of their rights? What role does the Internet play in this regard? Within the framework of the re:publica, young people discussed these issues on the main stage of the Netzfest last week, along with Serina Taylor and Carla Golm from the children and youth advisory council of the German Children's Fund, the philosopher Leander Scholz, the media educator Martin Riemer, the scientist Dr. Ingrid Stapf and the childhood scientist Daniela Tews. In the end, the following demands to Internet politicians were phrased:

Participation on the Internet and in politics

Empowerment in the Family

Learning with and via the net

These demands were based on the voices of children and young people recorded before, during and after the session "Where are the voices of children in Internet politics" at the Netzfest 2019. They are supposed to be discussed during the re:publica and further on with political decision makers. We thank all young and adult people for their participation in the process.

The demands as PDF for download: Children’s demands to Internet politicians 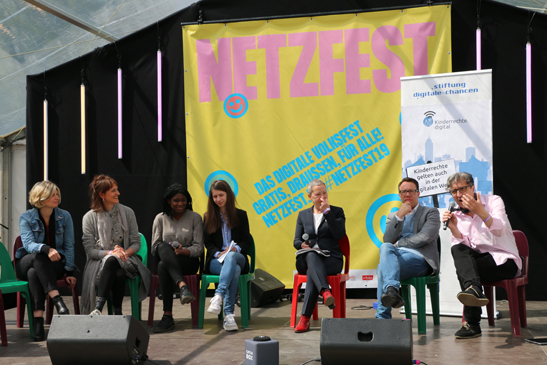 Leave your email and we'll inform you about new content.


Data protection: The e-mail address data to be transmitted is used exclusively for sending the newsletter. A passing on to third parties, also in excerpts, does not take place. If you unsubscribe, your data will be completely deleted.